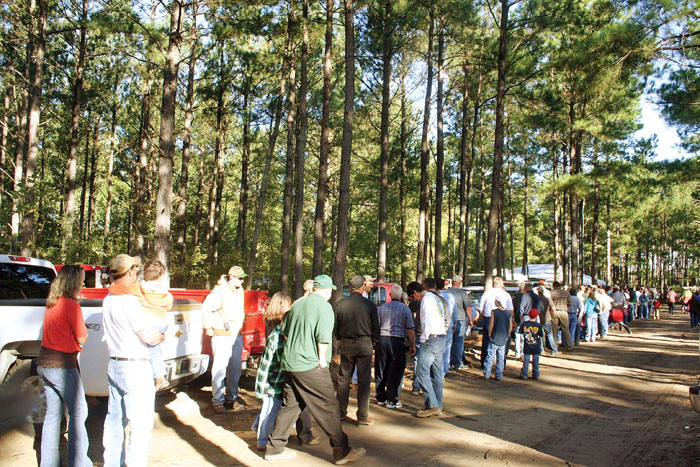 Weather was ideal, traffic was heavy and the overall outlook was noticeably bright. The Mid-Atlantic Logging & Biomass Expo, held October 7-8, gave forest industry professionals from all over the eastern U.S. a chance to take a break from their routine headaches and talk shop with their peers, while enjoying a day with their families and maybe getting a little business done as well. Sponsors placed total attendance at near 3,000 and valued equipment-products on hand at more than $100 million.

This was the largest show of its type to be held along the central East Coast as well as the first live show held in the region in four years. Its predecessor, the Carolina Log’n Demo, had been a single day event that attracted attendance primarily from within North Carolina, and that event had been temporarily reduced to a static event in 2009 due to the economy. This year the NC Assn. of Professional Loggers (NCAPL) and Hatton-Brown Publishers joined hands with the NC Forestry Assn. (NCFA) to develop a new and expanded live show.

Exhibitors came from as far away as eastern Canada; visitors traveled from Michigan, Pennsylvania, Ohio, Maryland, West Virginia, Mississippi, Alabama, Georgia, and of course, the Carolinas and Virginia. Exhibitors were pleasantly surprised when, in opposition to the usual trend, Friday morning saw much heavier traffic than expected. Scores of high school students from the area toured the site, taking it all in and absorbing information supplied by NCAPL and exhibitor tour guides. Predictably, Friday’s showing was overshadowed by Saturday’s attendance. By mid-morning Saturday, registration had swollen to such an extent that the registration procedure was modified to help unclog the temporary jam. Sponsors have already developed plans to streamline registration at future versions of the event. 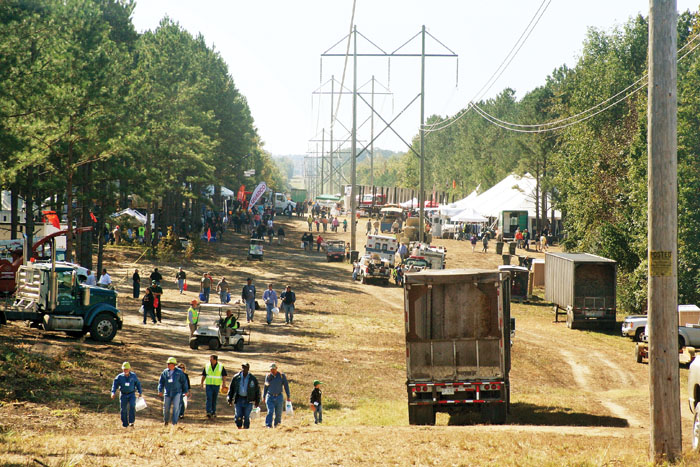 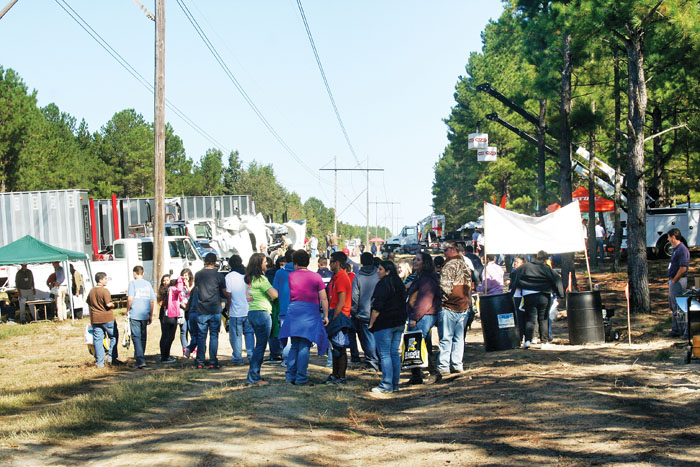 The consensus was clear early on: the show was a hit. Several loggers from states to the north said they came because no show of this size and type took place near their areas, and one equipment dealer from the Arkansas-Mississippi territory said Mid-Atlantic was better than similar shows held in his region in recent years. Exhibitors and attendees alike had almost universally positive comments. “The weather was perfect, the attendance was great and the exhibitors were happy,” according to NCAPL’s Doug Duncan, who managed the event with the assistance of NCFA’s Jack Swanner and many others. “We’re delighted with the way it turned out.”

Duncan was quick to thank the dozens of NCAPL and NCFA volunteers who stepped up in various capacities before, during and after the show. He thanked the landowner, Alan Wellons, and Mike Perry, of Forestry Services, Inc., for their vital generosity, cooperation and understanding. He also tipped his cap to local equipment dealer Bullock Brothers, owned by John and Landis Bullock, and many others in the Selma-Smithfield communities who helped contribute to the success of the show.

Though many loggers came just to look around and network, some machine sales were made on site. For example, John Woodie Enterprises reportedly sold the two new Barko loaders it displayed. Gary Clapfield of James River Equipment noted more than casual interest in a feller-buncher and a skidder at the John Deere site. As he put it, there were buyers in the crowd, not just browsers. Still, most exhibitors agreed that they didn’t expect to make many sales at the show, but to plant seeds that will lead to sales in the weeks and months that follow. By all accounts, interest was robust for both traditional logging equipment and chippers and grinders, and turnout was better than expected. 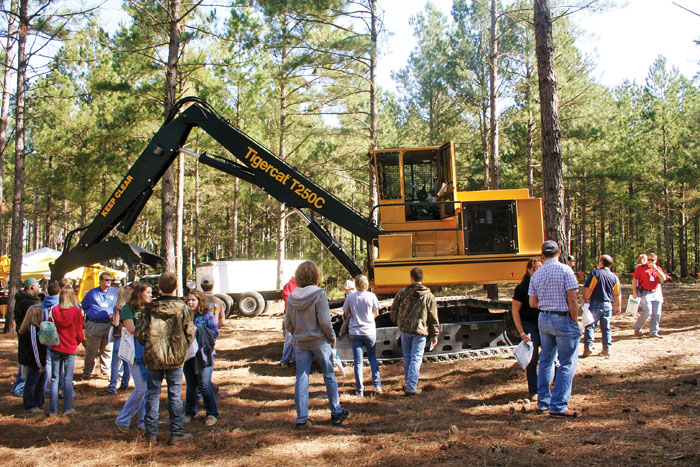 Most exhibitors reported good traffic. Salesmen from the heavy hitters like Deere, Cat and Tigercat had plenty of potential customers to keep them busy, and several loggers were seen leaving with tools, chain saws and other smaller items they bought. The word on the whole was that new equipment sales, after a dismal 2009, enjoyed a healthy resurrection in 2010 and have re­mained at that level in 2011. Berry Johnson, a John Deere forestry sales consultant, reported September numbers for 2011 and 2010 were virtually identical. “We’re not really in an upswing trend, but it has stabilized at a higher level than it was in 2009,” he says. “Another year like that and we’ll all be out of business.”

Johnson believes that loggers are holding onto equipment longer due to the economy. Their replacement mindset has shifted from five to seven years instead of three to four, he says. When they do trade, the machines are worn out, which has hurt the used equipment market, but helped new equipment.

Another common topic in show chatter was the belief that there won’t be enough logging capacity when the market rebounds. Even those manufacturers with captive financing will be forced to apply stricter rules, making it more difficult for new loggers to get financed and fill in the gap when demand does return. Johnson commented on this: “As costs of production go up, we can pass that cost off to our customers, but loggers can’t because their customers are mills, and mills set the price.” On the other side of this recession, he expects to see a consolidation, much like what happened to farming in the 1980s, resulting in a smaller force of larger, more efficient loggers—hopefully in a better position to negotiate price.

The show’s sponsors promoted the show heavily but don’t take all the credit for the heady turnout. Certainly quite a few pros show up to test their skills against that of their colleagues. Forestry Mutual Insurance Co. hosted the Logger’s Challenge tree felling competition. The top finisher was Eddie Norton of Burnsville, NC. The Prentice Loader Championship, of course, remained a popular attraction. Jamie Lindley, Siler City, NC, took first place with a trophy run time of 2:37:60. Following him in the top five were Joah Hackman, Pink Hill, NC, 2:41:13; John Dee Caraway III, New Bern, NC, 2:51:13; Norman Nance, Eden, NC, 3:05:22; and Shaun Carl Steele, Batesburg, SC, 3:16:22. The competition raised $868 for Log A Load For Kids through voluntary contestant contributions, which were matched by Caterpillar Forest Products, the competition’s sponsor. 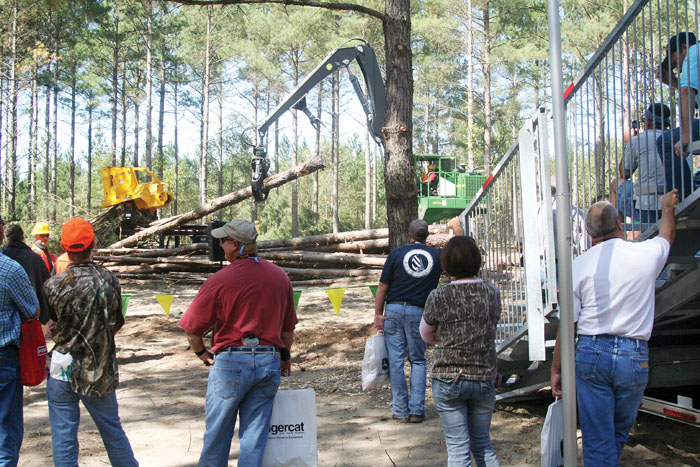 John Deere’s exhibit saw a lot of interest in a logging relic, a 1969 Deere 440-A cable skidder. Owner Dennis Collier of Four Oaks, NC, loaned the restored machine for display. Another big attraction that drew a lot of attention was the exhibit of classic chain saw collector David Harsh of Amilia Courthouse, Va. His demonstrations of his antique chain saws were popular with young and old alike.

Perhaps the biggest single crowd magnet was the tent occupied by logging celebrity Bobby Goodson and the Swamp Loggers crew. Even when the show traffic was lighter, the biggest crowd always seemed to be around Goodson, who did not appear to leave his table during the entire show except when standing up for photographs. Goodson has appeared at several past shows as a guest of a machinery manufacturer but this was the first time he and his entourage had their own tent. David Malson, a logger from Hamlin, Pa., admitted that meeting Goodson was one of his reasons for making the nearly 1,200 mile round-trip journey. “It’s like watching major league baseball compared to WWE Wrestling,” Malson said, comparing Swamp Loggers to competing show Ax Men. “And when you see Bobby in person, he’s just the same as he is on the show, not fake.”

Doug Duncan, M-A Logging & Biomass Expo Coordinator and Executive Director of the NC Assn. of Professional Loggers, one of the show sponsors, summed up the event:

“We had ‘all aces’ with good partners, widespread promotion, excellent weather, and satisfied exhibitors and attendees.

“There were several new entry biomass companies and forest product groups attending the expo who had been told of the strength of the logging force, equipment dealers and support vendors in the region. They got a chance to see it firsthand.

“The Smithfield/Selma location was a major accomplishment as it had excellent north-south and east-west Interstates and was well centered to the Mid-Atlantic region. We are already looking for a tract in the same area for 2013. 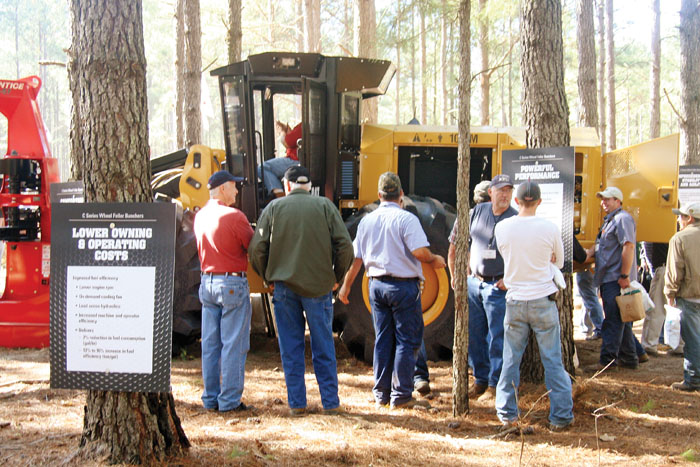 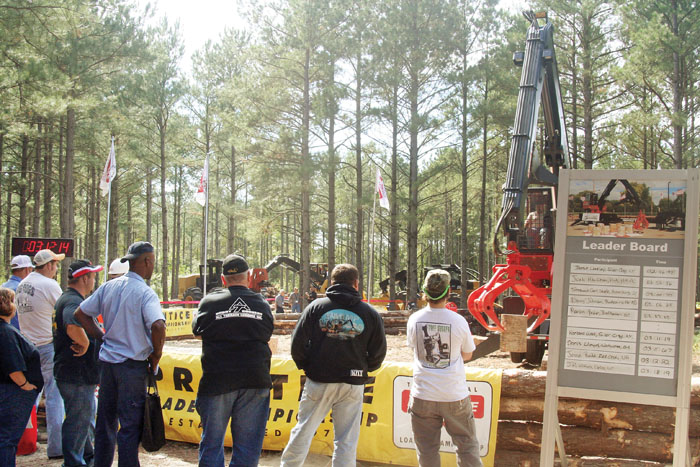 “The community leadership really pushed to make the show a major event. The Smithfield/Selma Chamber of Commerce and Johnston County Visitors Bureau were there from day one helping to plan and execute the show. All local beds and restaurants were full on Friday night.

“We were very pleased to see the eight busloads of FFA students from surrounding counties that showed up on Friday. Loggers from our association met them and led them through the grounds on a guided tour. Several of these ‘host loggers’ must have missed their calling. All day Saturday I heard from exhibitors who appreciated talking to this next generation and having loggers personally speak of the importance of good logging equipment, trucks, trailers, service vehicles, insurance and on and on.   This discussion was woven throughout as to the importance of forest management and professional logging practices.

The Mid-Atlantic region has that ideal mix: a sizable and renewable wood-basket, committed landowners, diverse forest product markets and logging professionals essential to delivering the goods.  The turnout and overall success of the expo were testament to these facts. We laid the basis for success in many areas this year and will be building on them for 2013.”